One of the nicest parts of holiday sales is hearing, “That’s perfect for….” and the story of who and why. It’s like you become part of the story, as well as the extended family. 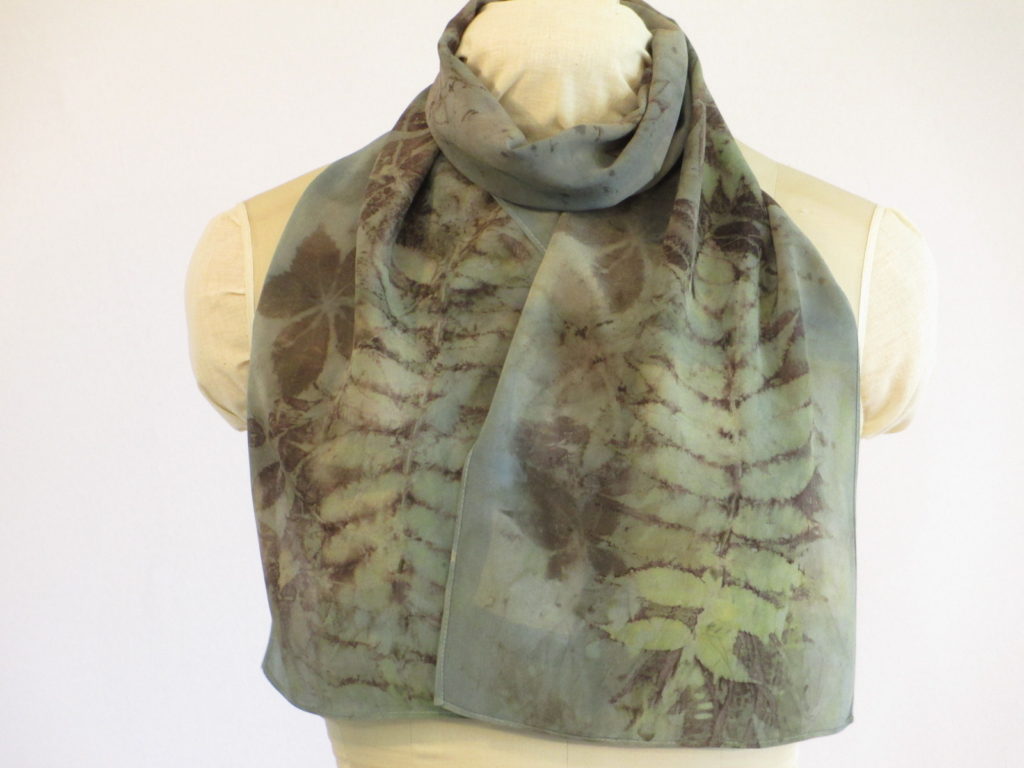 That happens a lot with the botanical dye scarves and yarns I sell. People are looking for something they can feel good about giving, and they like being able to honor a giftee’s love of nature. I love that people are interested in the techniques and materials I use, and that those items go out in the world to spark conversations.

END_OF_DOCUMENT_TOKEN_TO_BE_REPLACED

Before leaving for Amana last week, I managed to ply my first yarn on my new spinning wheel. Since I was pressed for time (and didn’t think of it until later), I didn’t check the Wraps Per Inch or weigh the yarn.

Eyeballing and winging it are well within my comfort zone. I know I can always come up with a solution if I run short. But taking a few minutes to check the weight and WPI would certainly make it easier for someone else to begin a similar project. Next time. 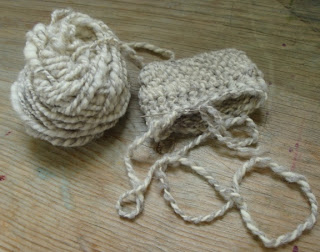 This time, though, I guessed that I had enough yarn to make a small pouch using a couple of looping variations. This fairly bulky yarn let me work on a scale that was good for demonstrating to the public. Like most looping, this was a good project for a situation where there were many distractions (like good conversations and the siren call of the cookie table). I did manage to make an unintentional decrease in the cross-knit section. The world did not stop spinning on its axis as a result.

Starting from a needle chain base, I worked the bottom in Burundi stitch (a complex looping variation that intersects with multiple previous rows). I finished that section with a row of double-crown (a knotted looping variation). Then I switched to cross-knit looping, which looks like stockinette stitch in knitting. A few more rows of Burundi help stabilize the rim. I added a tubular strap with a loop on the end that goes through another loop and around a button on the opposite side of the bag. The button I made from looping stuffed with the extra-kinky bits of the yarn that I broke off rather than fight with on the body of the bag.

I finished with exactly two inches of yarn to spare. 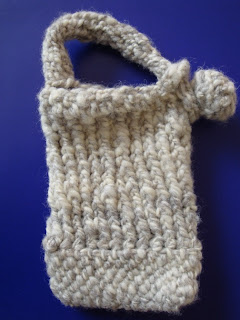 The double-loop closure should be secure enough to attach to a belt loop. I’ll use this bag for my digital camera. But I want a bit more protection for the screen side, so I’ll add an outer pocket, which will also give me a place to keep paper, a pen, and an extra media card. I’ll also add a tab and button at the top as insurance to make sure my camera can’t pop out. My plan is to pull out the walnut dyebath for the yarn I’ll use for the pocket and tab. With a bit of color contrast to add interest, who’ll know that I ran out of yarn? You won’t tell, right?

By the way, en route to Amana I stopped at Borders in Madison to go to the restroom and check out the magazines. I bought the May 2010 issue of Yarn Forward, a British knitting magazine, which has a tutorial article on naalbinding by Swedish fiber artist Barbro Wilhelmsson. Looks like you can buy a digital version of the issue here.