Yesterday I finally managed to dye yarn with my first indigo Sig vat. It was almost another failed experiment. And as usual, I probably learned more because of that. 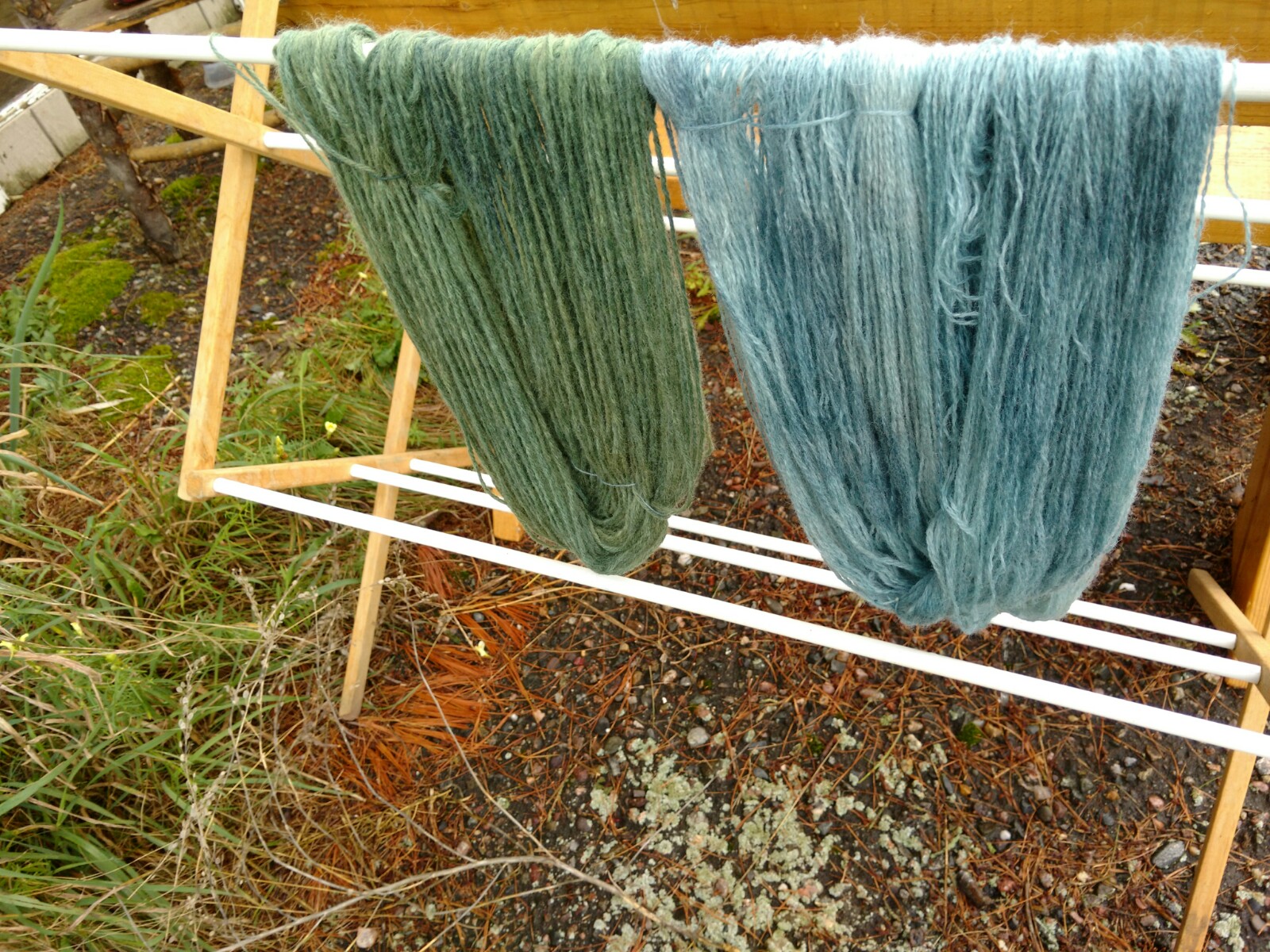 Here are the results after one dip on white wool (right) and over sumac to make the green. 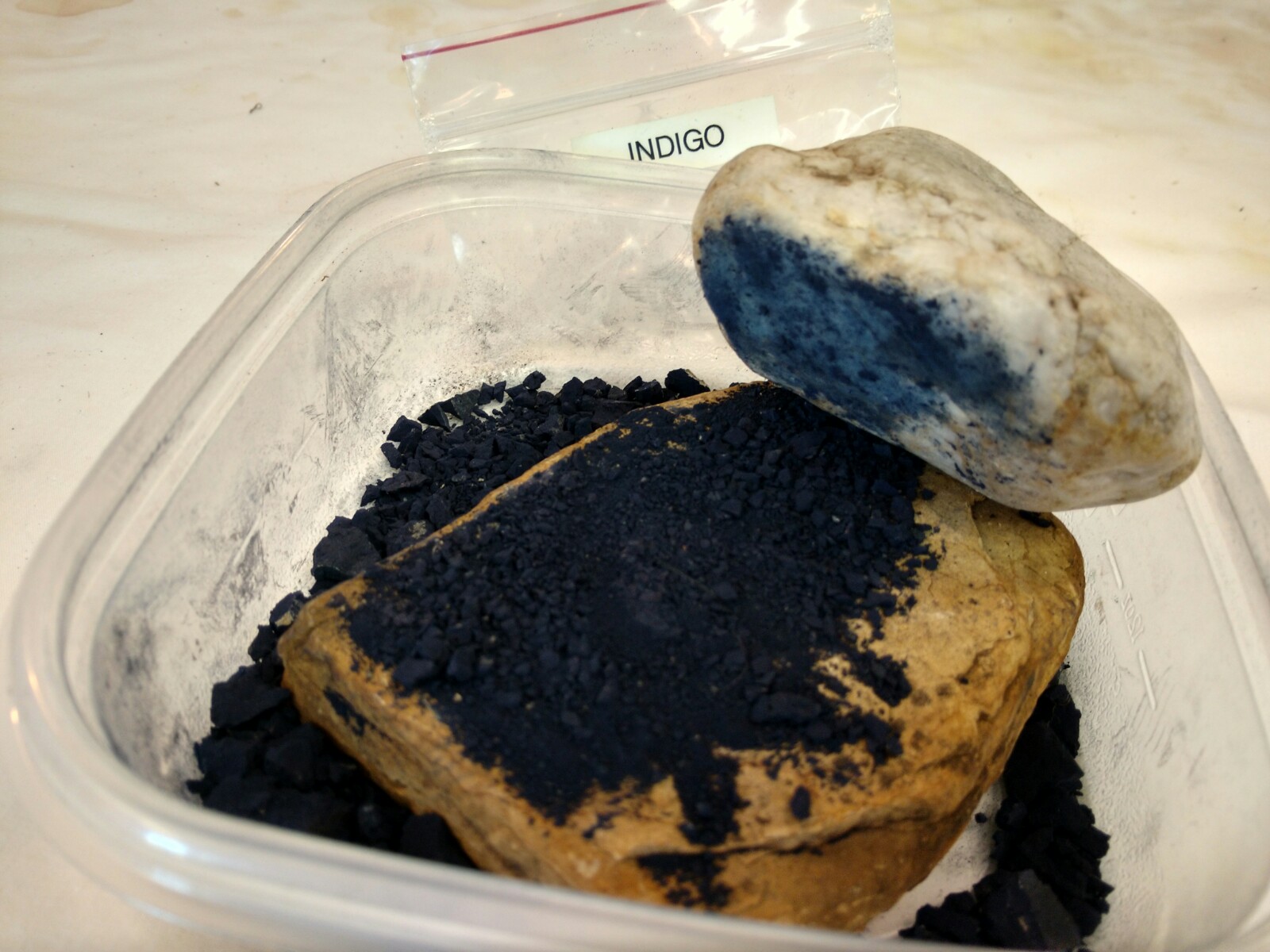 Part of the problem (I think) is that I got such a late start. The warm days and warmish nights of summer come and go quickly in northern Wisconsin. It was the third week in August before I ground the indigo to go into the jar of stale pee we had been saving. 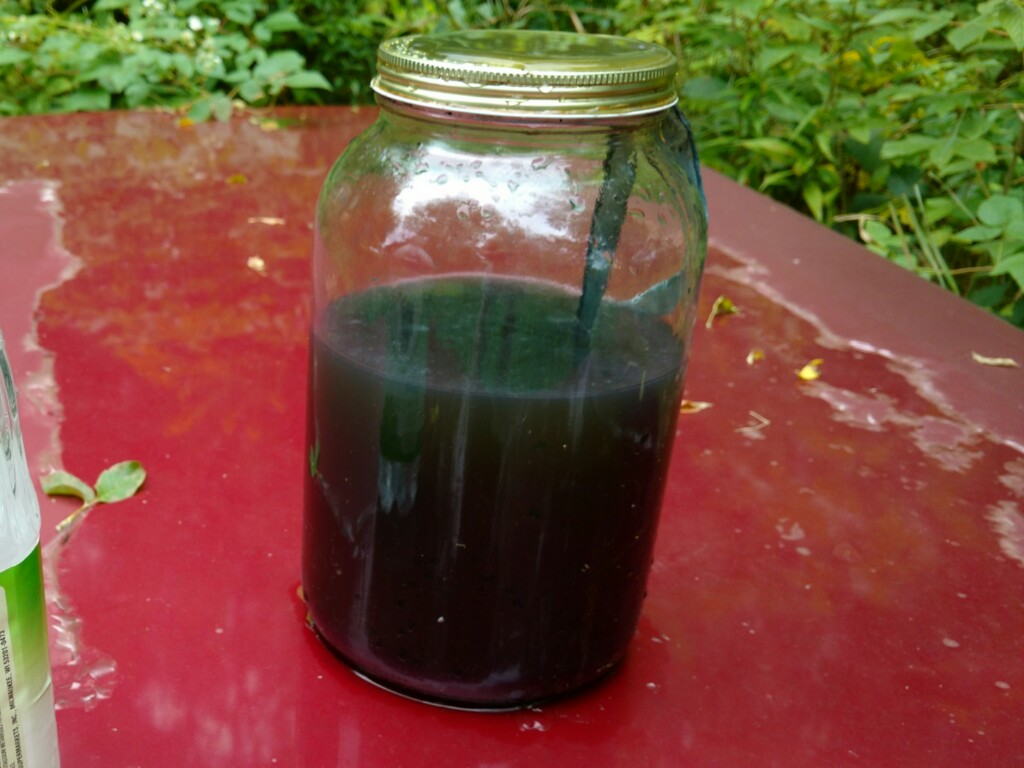 I put the powder into a fabric bag in the jar and massaged the bag once or twice every day to help it dissolve. There were some mornings when the liquid was pretty cold. 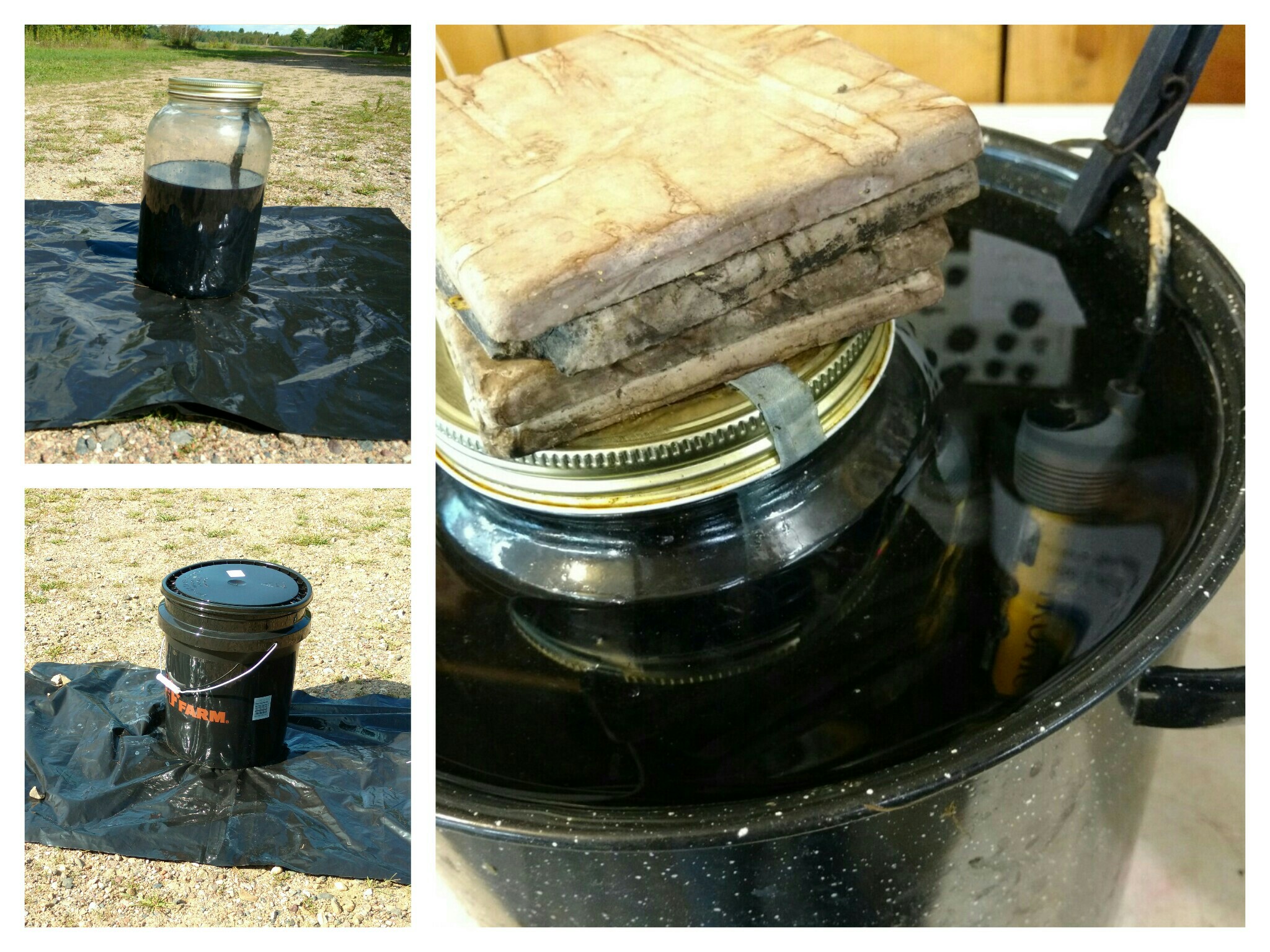 I tried different ways to keep it warm. An aquarium heater in the water of a double boiler didn’t seem warm enough. Bill wouldn’t let me put the jar in his truck where the sun could really warm it up (I was only half kidding when I asked). Putting the jar in a black bucket during the day helped, and I was putting the jar in an old ice chest indoors at night to try to keep it from cooling down. But nothing seemed to be happening inside the jar. And once September arrived, I got nervous. 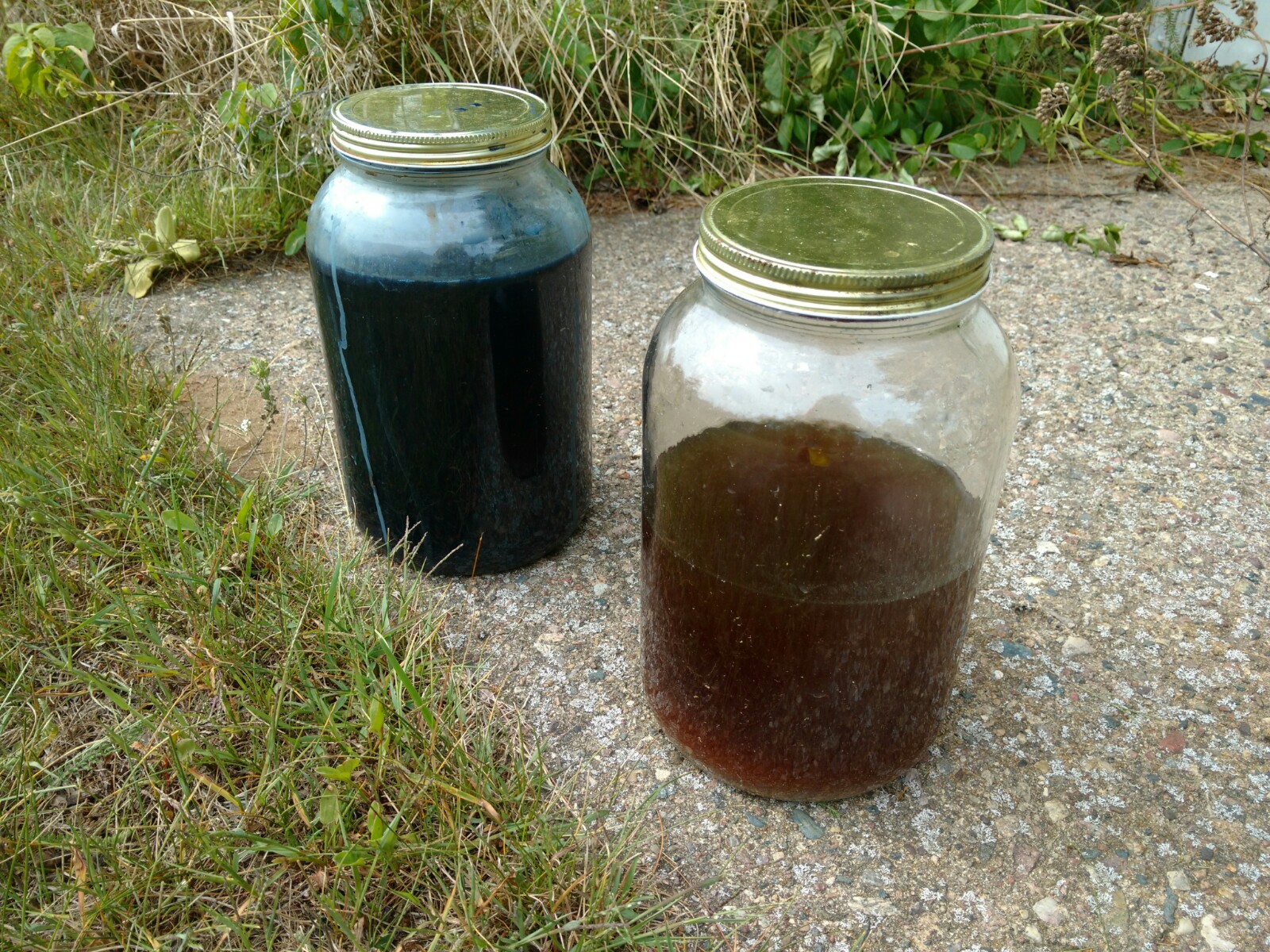 So Bill mixed up a wine yeast starter for me. We hoped to kick-start fermentation that would consume the oxygen in the vat. I mixed the jar with the dissolved indigo and a jar of stale urine (saved for soaking wool before dyeing to feed the vat as well as wet the yarn). Then I split the yeast starter between the two jars.
And…. nothing. 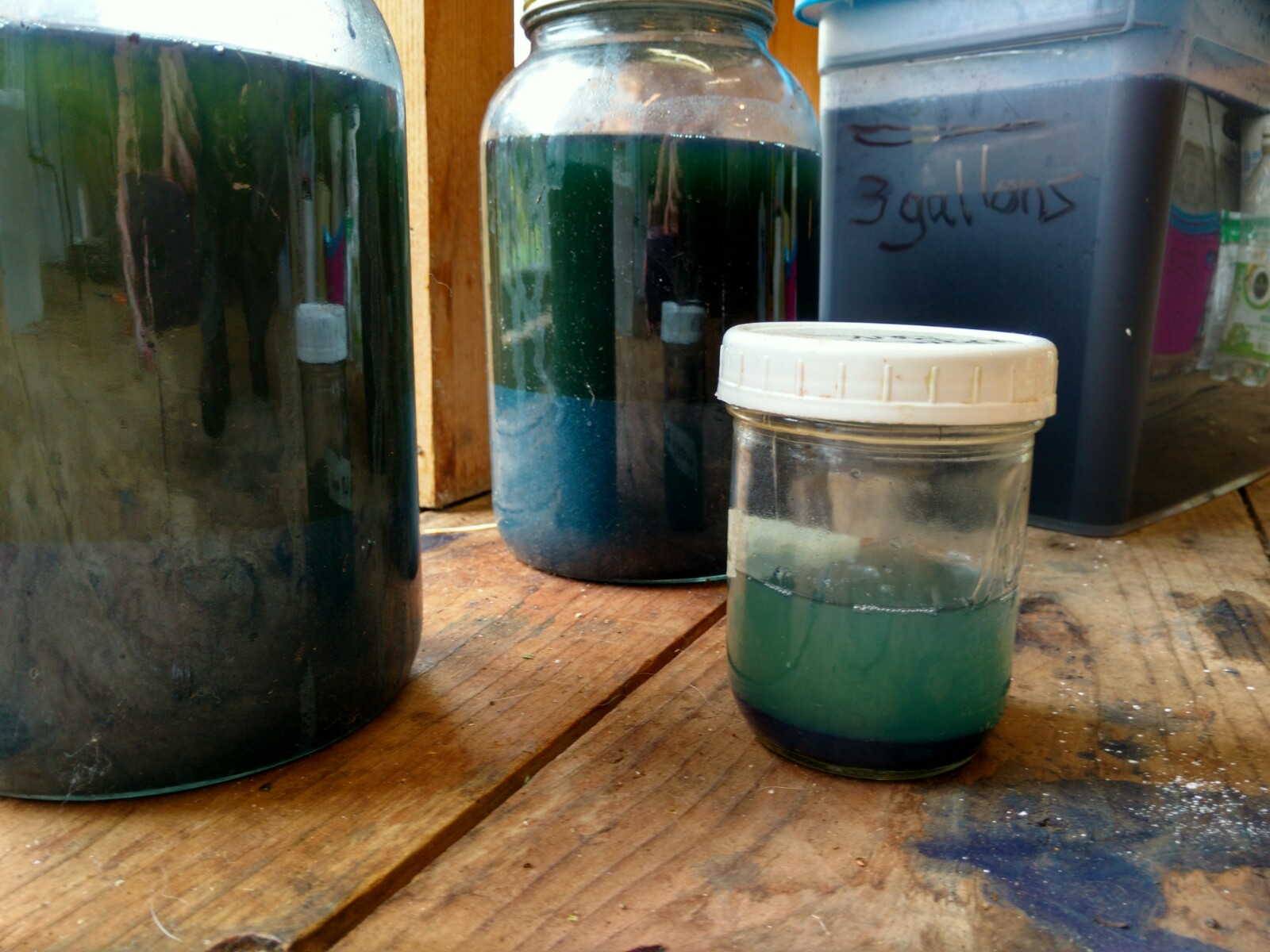 Finally, I did a test and made a sample a lot more alkaline. Right away you could see the solution change. So I added lime to the jars, and they soon changed from blue to green — ready to dye. I didn’t even test the pH, just shoved in wet skeins. The wool didn’t dissolve in that alkaline solution, and the yarn didn’t seem damaged in any way.

Biggest surprise? The pee smell in the yarn was mostly gone after rinsing and a sour soak. I washed it and left it soaking overnight. Will give it a sniff this morning to see if it needs a second wash-rinse cycle.

In the end, it isn’t a traditional Sig vat. But with Bill’s help, we managed to get the vat unstuck and get color. And I’m gaining confidence in playing with the chemistry of dyeing.