At what point are invaders considered naturalized? That’s been a central topic in a class I’m taking this fall on the ethnobotany of Central Wisconsin. A recurring theme has been how one person’s weed is another’s food or medicinal plant — or natural dye. 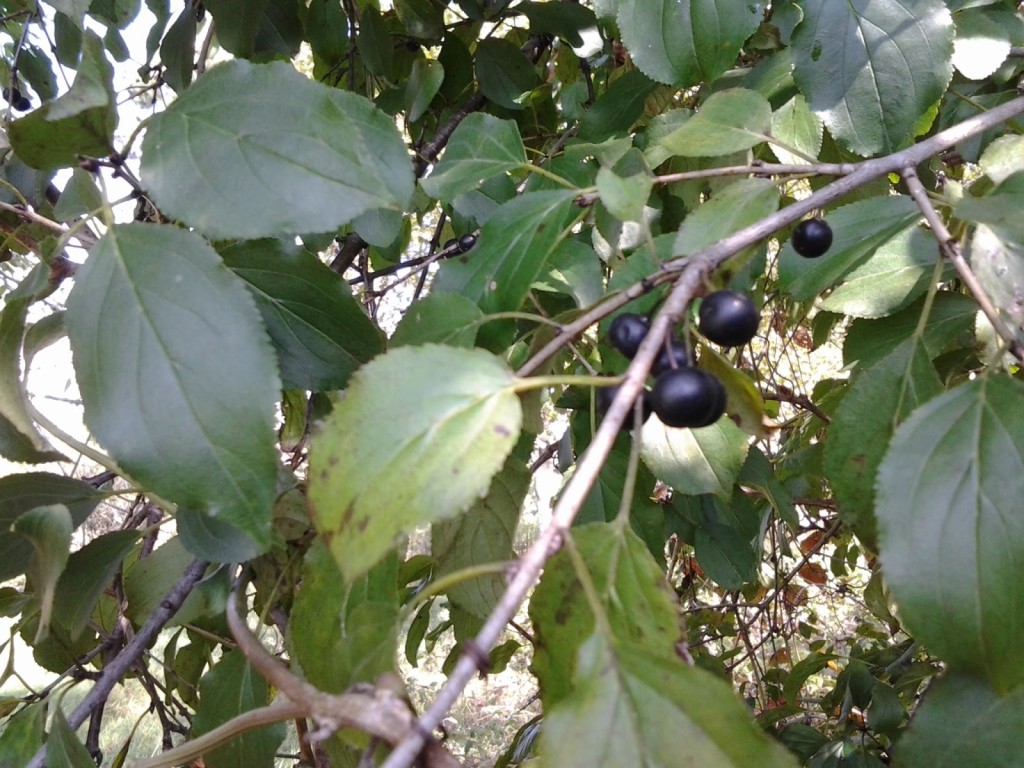 It wasn’t on the syllabus, but buckthorn came into the discussion early in the class. We’ve all tried and failed to stop the spread of this European invader. Buckthorn leafs out early and holds its leaves late, often shading native plants. And it produces a huge amount of fruit, making it easy for birds that eat the fruit to disperse the seed where they poop, making more buckthorn. It has spread so widely now in our area that it seems likely here to stay. Which led to the question, “What will people think of it in 400 years?”

I couldn’t help but think about buckthorn again last night on the way home from ethnobotany class after discussing seed dispersal. I’ve been doing more dye experiments with buckthorn at home (still treating the spent dyestuff like toxic waste). But when a student in my upcoming Sievers natural dye retreat considered bringing it, I said no. Sievers is located on Washington Island where, for example, there are no rabbits. A bear might occasionally make its way across the ice on Lake Michigan’s Green Bay. Birds certainly can find their way to the island. But we don’t want to take a chance on accidentally sowing a bunch of buckthorn.

I don’t want to take chances with pests, either. Things like the emerald ash borer are so easily transported by people who unknowingly take firewood when they go camping or to the cottage.

So on principle, I heated all the dried willow bark and white pine bark I’m taking for students. The willow still has its outer bark. And there’s a bit of outer bark here and there on the white pine, which I harvested in a hurry when a large limb came down in my yard last summer. Underneath that outer bark layer is a cozy place for a pest to hide.

Last night I asked for advice from the instructor and master gardeners in my ethnobotany class on how to avoid transporting soil-borne pests or disease in the live plants I’m taking to Sievers. Before frost, I dug up Japanese indigo I grew this summer so we can dye with the fresh leaves. I’ll follow their advice to double-bag the pots to contain the soil, then bring it home with me to go in my own compost pile.

While I’m always delighted to head to Sievers, I do regret that I’ll miss one session of the ethnobotany class  while I’m on the island. And it’s blueberries, cranberries and wintergreen — drat!