On Saturday, I set aside nagging doubts and made my first fresh-leaf indigo vat with leaves from plants grown in northern Wisconsin. And it worked! 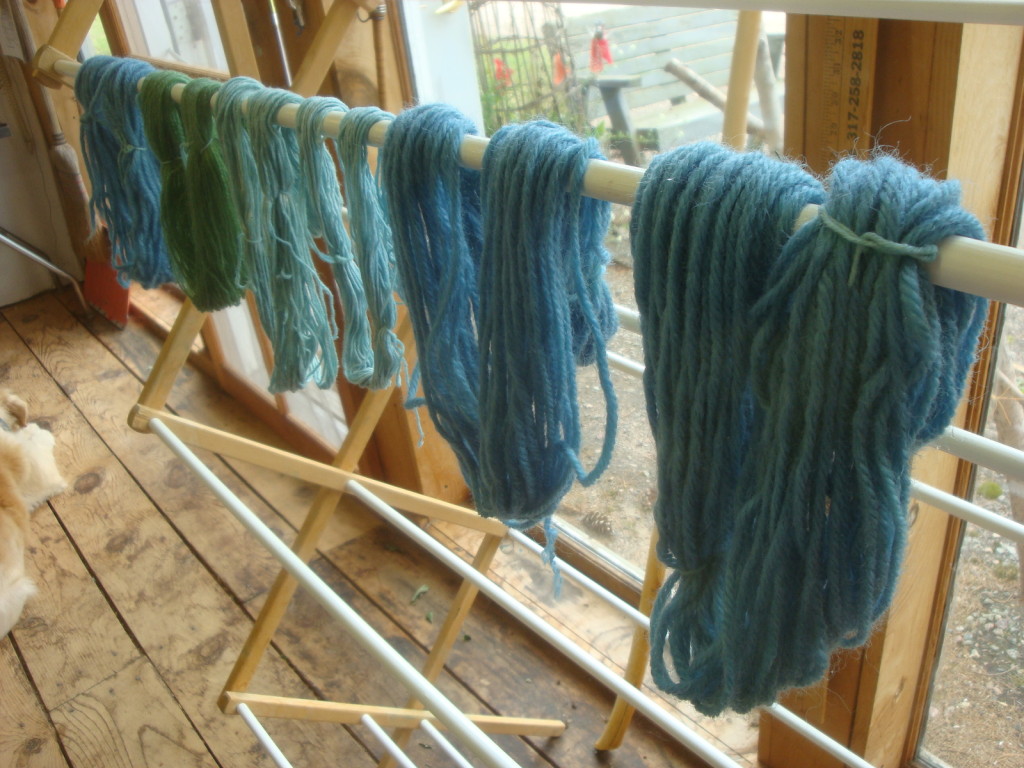 Usually, I don’t stress that much about experiments that might fail. But with a limited supply of fresh leaves, I was more than a little afraid a mistake could cost me a whole growing season. 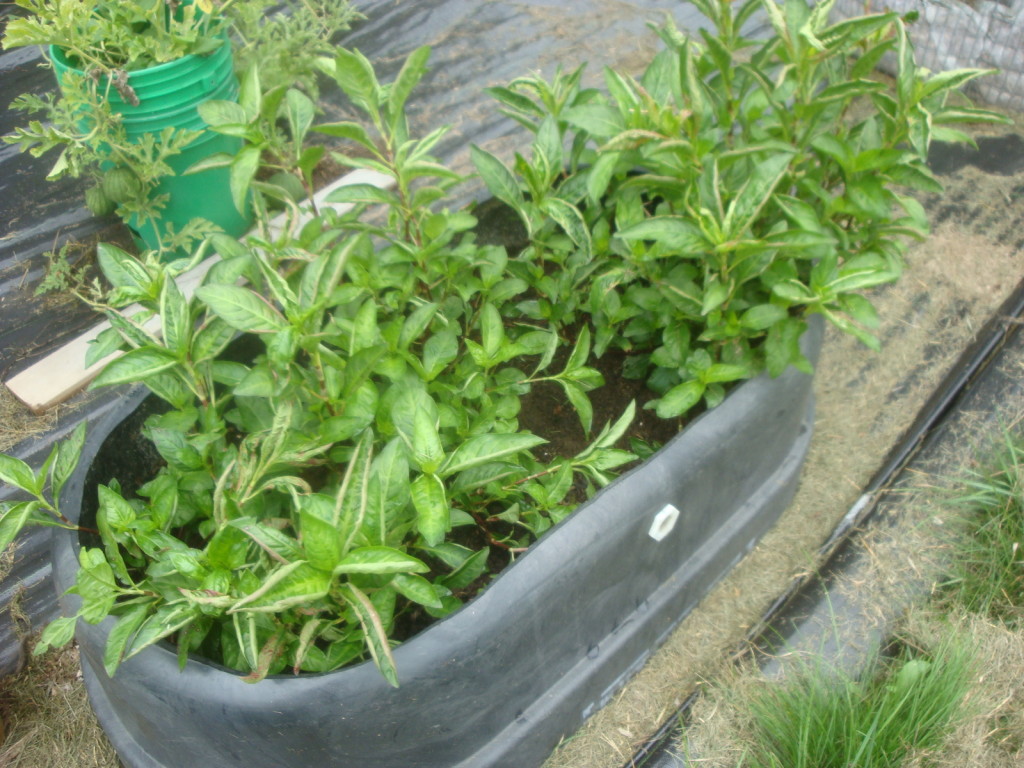 I had only a small amount of Japanese indigo (polygonum tinctorium) seeds, and not all germinated (probably my own fault). So I ended up with just three plants, which are growing in a recycled horse trough container with the bottom cut out. (Our soil is so sandy that we grow mostly in containers now.) Those three plants were set out under plastic milk jug cloches in early June. Because it was so cool and they were so spindly, the cloches were still on at the end of June when I returned home after two back-to-back conferences. The plants finally took off in late July, and I might have gotten a cutting then since bruised leaves were showing blue. But there were convenient excuses for stalling until last weekend.

After reviewing my references on fresh-leaf indigo dyeing, I finally chose to follow these instructions from Cynthia Thayer. I’m still hoping to get seeds from these plants, so didn’t want to pick all the leaves. When I weighed what I had picked, it was just shy of 8 ounces. So I picked a few more leaves and halved the recipe. 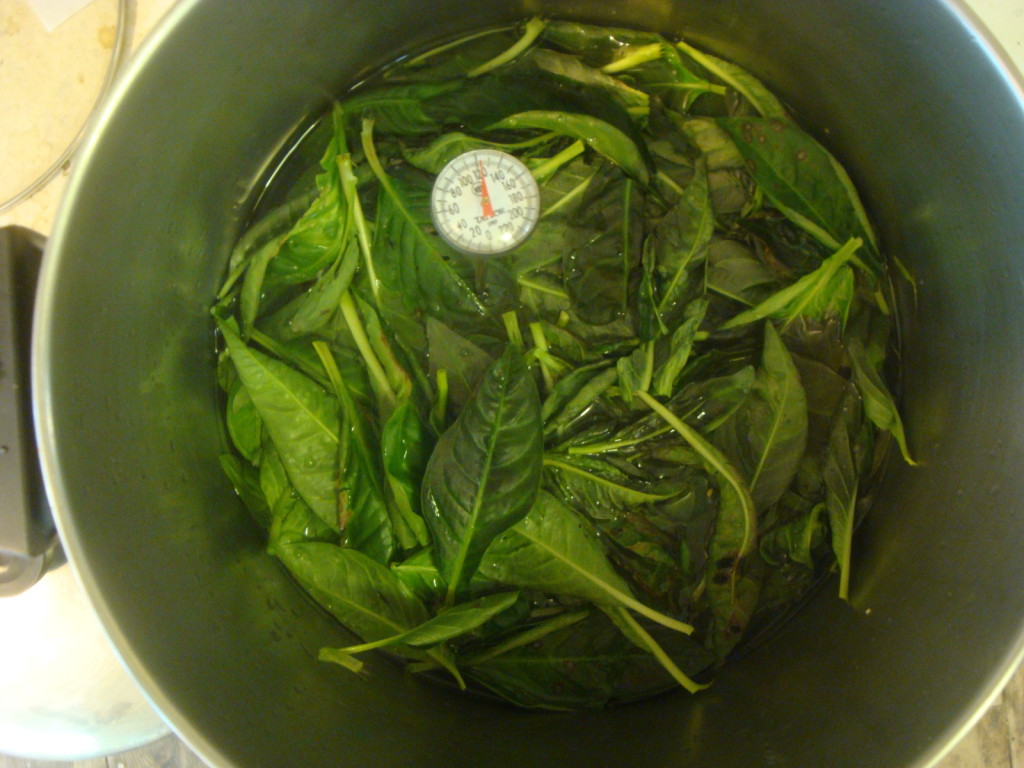 The hardest part was slowly heating the leaves over a two-hour period. It’s a battle for me to not get caught up in something and forget about a burner. But I managed to take 2 hours and 15 minutes to bring the kettle up to 160 degrees Fahrenheit while I got some yarn skeined. 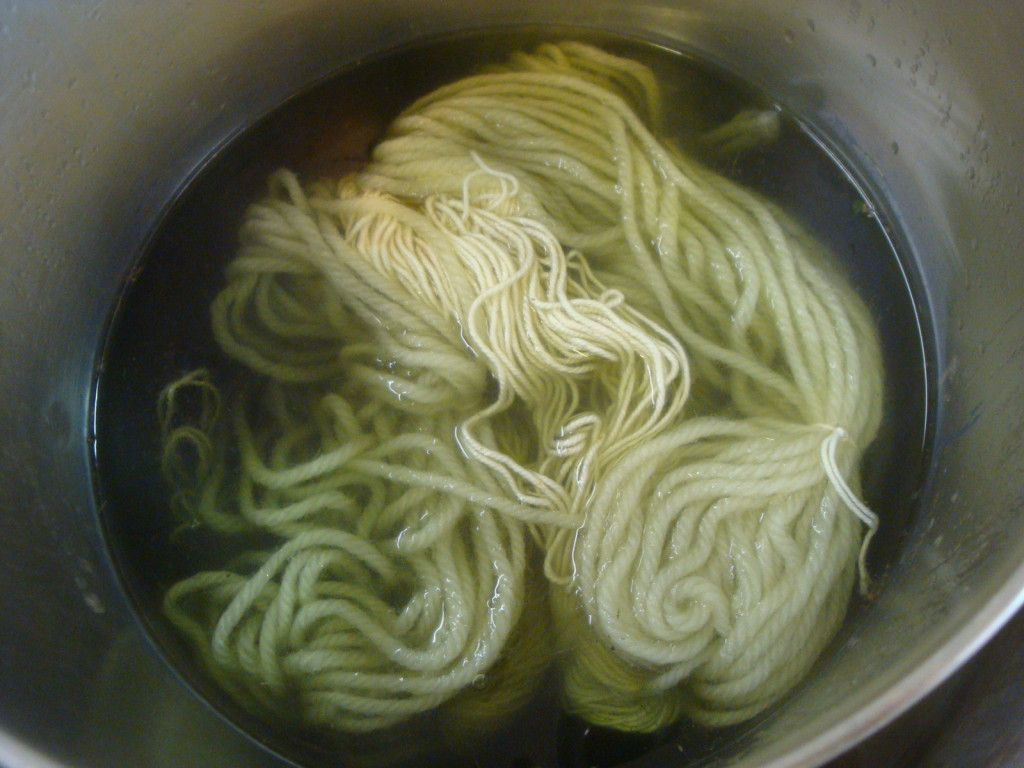 Here’s what it looked like after straining out the leaves, adjusting the pH (to about 7.5), aerating the liquid, adding Thiox, letting the vat rest at 110 degrees for an hour, and adding wetted yarn. The only reason I wasn’t biting my nails for the next 20 minutes was because I was wearing rubber gloves.

The Cynthia Thayer recipe said 16 ounces of fresh leaves should dye 2 to 4 ounces of yarn. I used half those leaves, so I added 3 ounces of yarn. (Math was never my strong suit, and I’m sure those of you who know how cavalier I generally am about weight of fiber are laughing your heads off now.) 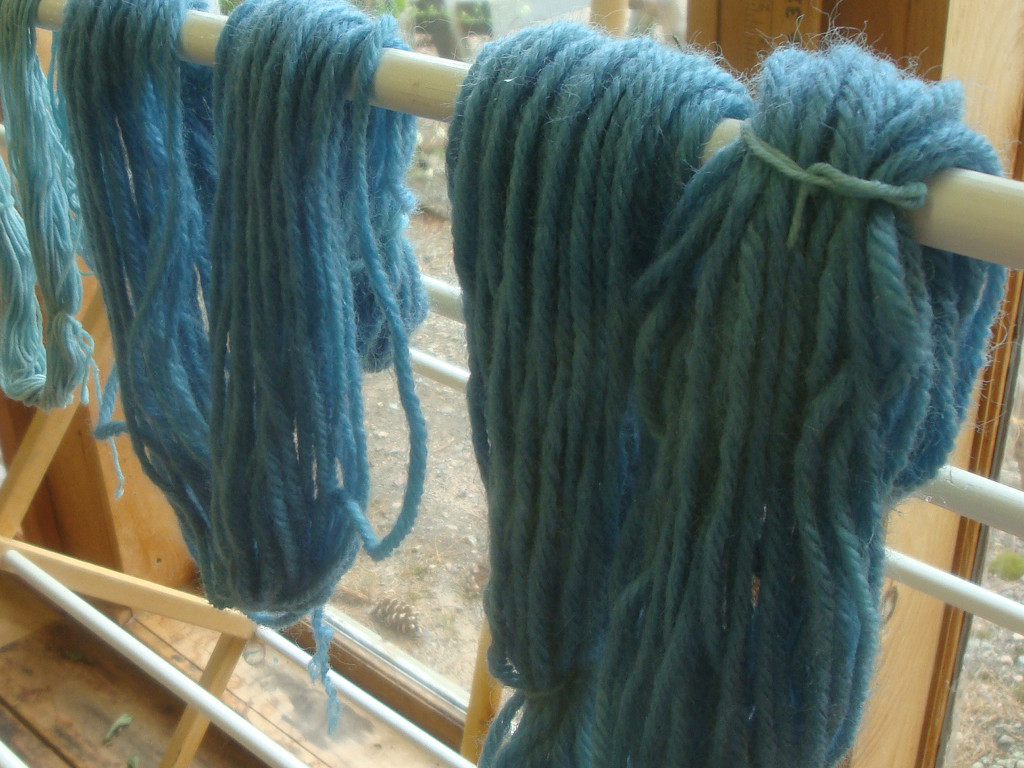 Upon removal from the vat, the test skeins immediately turned a beautiful, satisfying, relief-inducing blue. Subsequent dips did not change the depth of color much, but that’s probably my own fault. 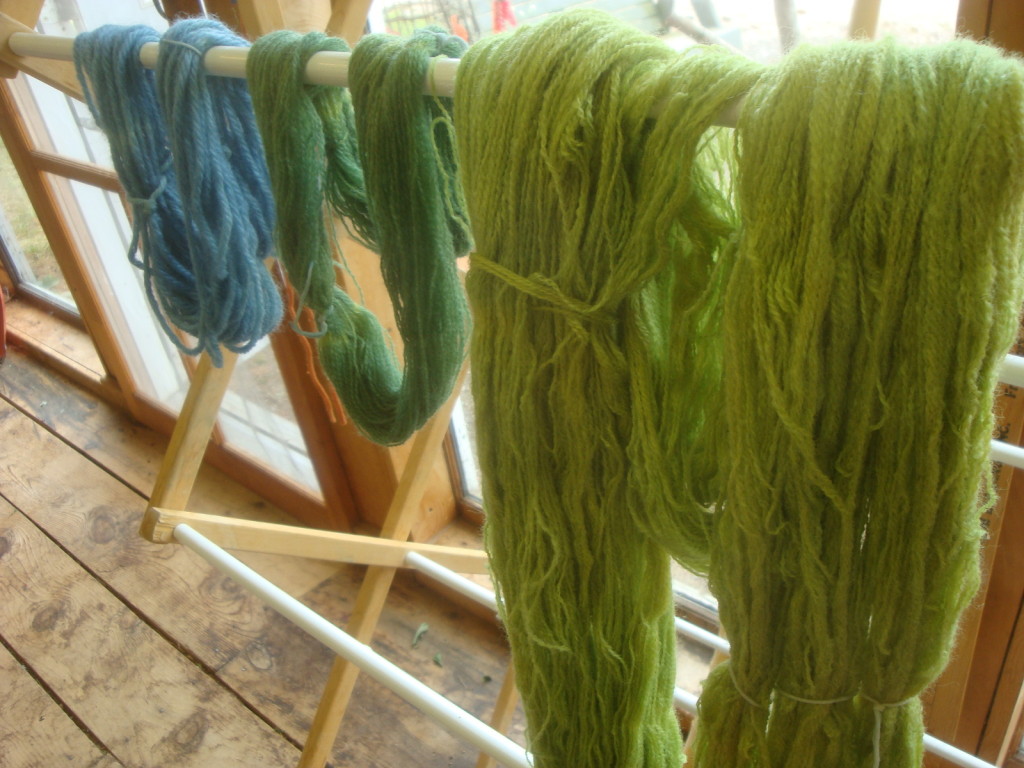 One of the skeins in my 3 ounce test batch was an electric yellow from rhubarb leaf dye. It turned a lovely green when overdyed with the fresh-leaf indigo. So instead of proceeding with methodical repeat dips to get more depth of color on my formerly white test skeins, I threw the second and third skeins in with the whole hank of rhubarb yellow lace yarn. It turned from electric yellow to the perfect (to me) spring green.

So I figured what the heck, I threw in a hank of white lace yarn. It turned a very pale ice blue, which surprised me. I figured the vat didn’t owe me anything more from that 8 ounces of leaves.

I’ll probably end up overdyeing most of that hank next time. Assuming we don’t have an early frost, I hope to get one more vat from these plants and still bring in one to save for seed for next year.