When I can glean materials for natural dyeing that would otherwise end up on the compost pile, I’m a happy dyer. That’s what I’ve been working with lately — the waste from processing bark for this basket, and rhubarb leaves I saved from last summer. 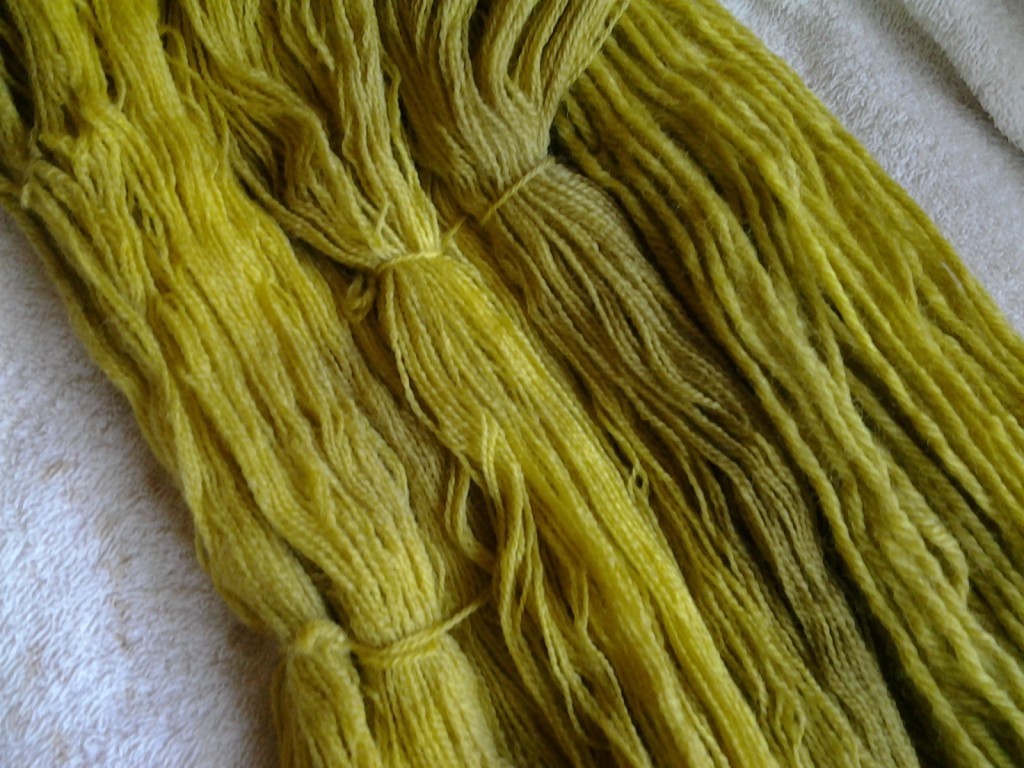 Bill and I grow rhubarb, which we gorge on in summer and freeze for winter. When I harvest the stalks, I save the leaves for natural dyeing. The oxalic acid in rhubarb leaves seems to help yarns take up other natural dye colors better, but on its own the color is not that special. Usually.  This time, I got an electric yellow-green — best color ever for me from a rhubarb leaf dyebath by itself. So now I have a fade test going to see how colorfast this yarn will be.

That bright yellow-green came from a dyebath that used about 2-1/2 dry-packed gallon bags of frozen leaves. During the growing season, I save the leaves trimmed from rhubarb stalks we’re eating or freezing and dry-pack them in plastic bags to freeze for winter dyeing. For the wool yarns above and below, I cooked the leaves three or four times, blending the first two baths for the yarn above. The yarn was not mordanted, but I did use an aluminum pot for cooking the leaves and dyeing the yarn. Even the exhaust baths gave more color than I usually get. 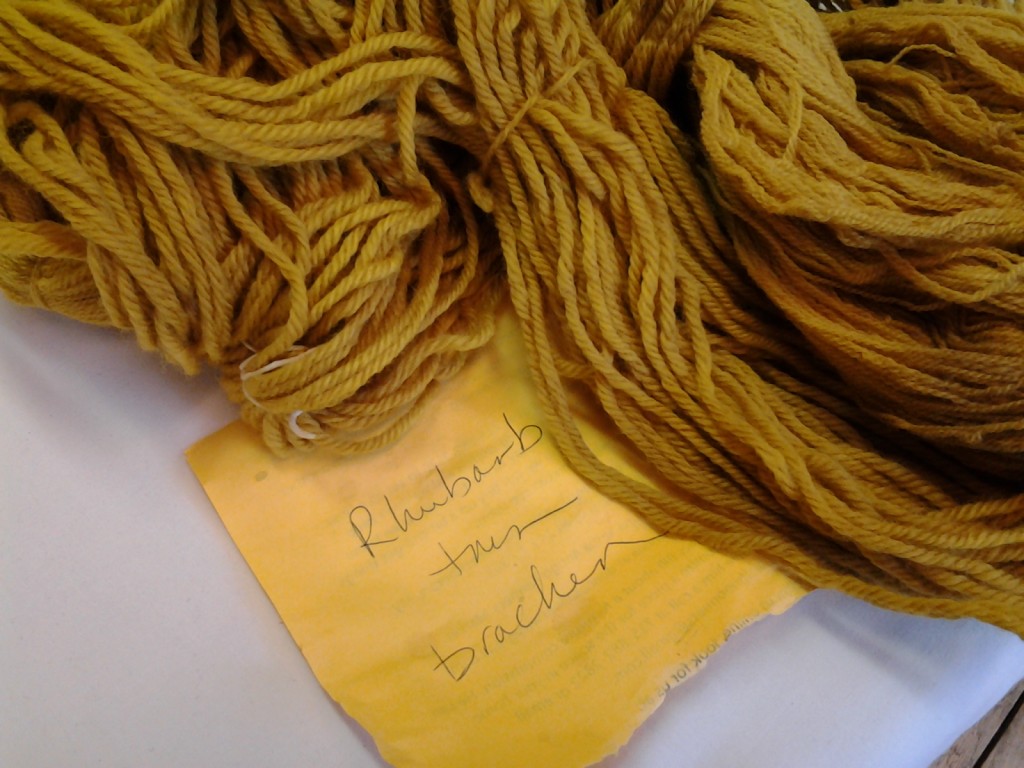 I’m also thrilled with what happened with the rhubarb when I overdyed it. I’m still playing with pH, so had added about a tablespoon of soda ash to a frozen bracken dyepot to see what that would do. It looked great in the pot, but didn’t do much to brag about on its own. But when I overdyed that strong rhubarb leaf with bracken, it gave a brassy gold that I love.

If you play this game, be sure to check the pH of your dyepot before applying heat. Heating a strongly alkaline dyebath can ruin your wool. 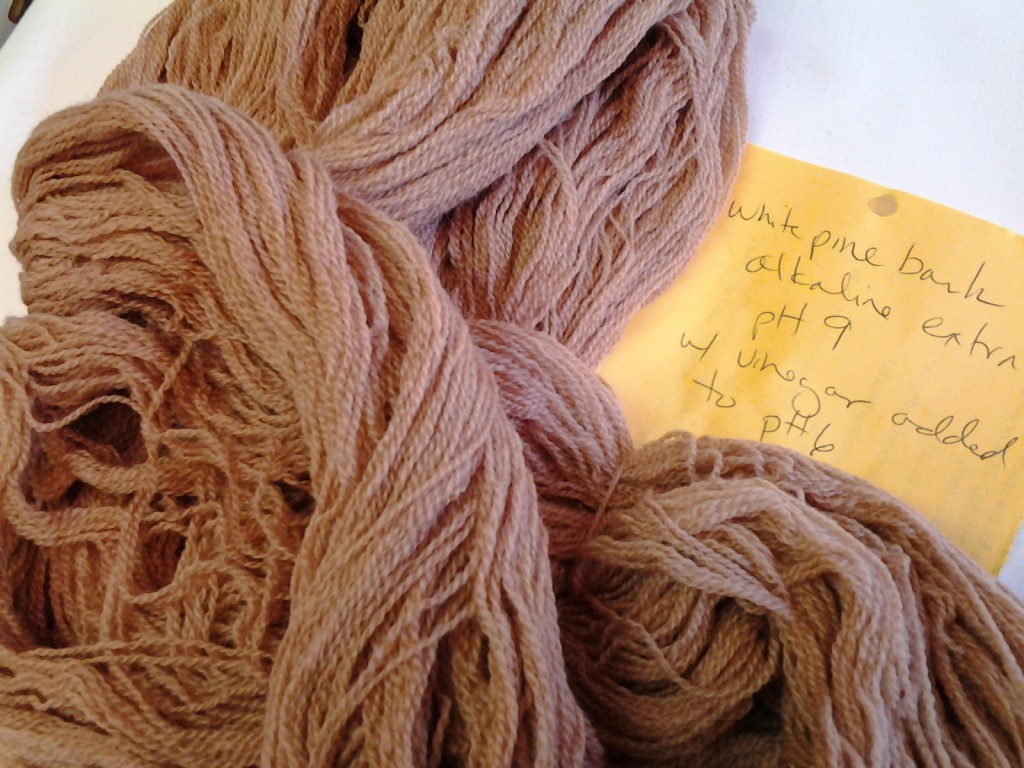 That said, I’ve been playing with alkaline extractions for bark dyes, and then simmering wool yarn and cotton fabric in the extracts. The extract for the yarn above was made by stuffing a quart jar with the shaggy bits of white pine bark saved from making this looped basket. I add cold water then about half a tablespoon of soda ash to the jar, shake it as often as I remember, then strain off the liquid when I’m ready to dye, top up the jar with water, add more soda ash, and repeat. Over time, the alkalinity drops. If I’m rushing things, I add a bit of white vinegar to the dyepot to drop the pH to a safe level for wool. I just started a fade test on this yarn.

I also started a fade test on these soy-mordanted cottons, which were simmered with willow bark and white pine bark alkaline extracts. With cellulose fibers the high pH is a benefit rather than a concern. The willow bark sample on the left got rushed a bit when I left to go help collect maple sap for our neighbors who make syrup. The white pine bark sample on the right was boiled about 25 minutes. Both were left to soak in their liquid overnight before rinsing.

What’s soaking right now is the linen thread I tested using the same bark extracts. I’ll keep you posted on those, and the fade tests.

A word of caution: When they’re cooking, rhubarb leaves look like something the dog threw up but smell just as yummy as rhubarb sauce made from the stalks. The leaves are considered toxic, though, so protect family members and pets from potential consequences. My rhubarb sludge and spent dyebaths go into a special compost bin the dogs can’t get into, and I keep pots and buckets covered and out of reach when the dogs are in my studio.