Teaching left-handed when you’re not is a great reminder of how students often feel — awkward, uncertain, maybe anxious, or a little embarrassed. Between the e-course I’m teaching and the e-course I’m taking, this week I’ve felt all that.

With years of practice, I’ve learned to give reasonably fluid demonstrations of left-handed looping techniques, even though that hand is not naturally adept at the fine motor skills of manipulating a needle. And from years of teaching workshops in person, I know most of my left-handed students are adept at translating righty into lefty. So once the basics are established, most offers to show variations left-handed are met with, “No, thanks, I think I’ve got it.” 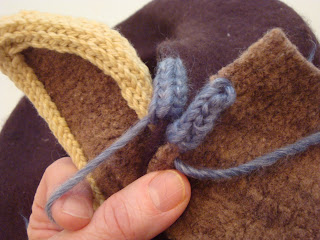 Not this time. In my new cross-knit looping eCourse, I could tell from students’ comments and questions that I needed to add a left-handed cross-knit edging video. Sighs of relief echoed across the interwebs when I said I would add one next week. They waited patiently. I shot it. I reshot it. And reshot it again. And finally, after two weeks, it went up on the course site.

Ginger Rogers made dancing with Fred Astaire look effortless, and she did it backwards and in high heels. In my own little fantasy world, I work to create a Ginger-esque sense of seamless fluidity in the content I produce for my eCourses. Sometimes, when I stumble (and I do) I save that footage for a gag reel at the end of a course.

Not this time. I’ve emptied a digital trash bin full of left-handed looping video. Such poor modeling could only confuse students further.

Because I was so awkward, I kept moving the piece out of the camera’s frame and closer to my bifocals. I hit the lens with my needle at least once.

My left-handed demonstration skills are not as fluid as would like, so I’m going to start by showing how the stitching looks once you get going on an edging. Then we’ll go back to how to begin and end.

In some ways, I think I’d like to alter the progression of the Massive Open Online Course I’m taking, too. And as an academic exercise, I can understand why the course is structured the way it is. But for much of the first two weeks I’ve felt like a lab rat in someone’s Massive Open Online Research Project. It’s not that I lack the wit or the will to operate in a self-directed learning environment. Frankly, I’ve done just that for years while cobbling together bits and pieces of references on a relatively obscure specialty. For me, that kind of learning generally produces excitement, anticipation, the thrill of discovery — not the awkward, uncertain, anxiety I’ve felt in the #EDCMOOC.

In other words, I’ve felt like a right-handed stitcher demonstrating left-handed.

If I could alter the progression of the course, I would take some of the energy put into the first week’s live chat session (recorded here), and put it into producing video introductions to aspects of the material by individual members of the instructional team. Yes, some students might hate the “sage on a stage” model. And they could ignore those course elements. As for me, I would appreciate some talking heads. Their absence feels too much like the reluctance of lab assistants to interact or influence their subjects.

In a class of 40,000 students, I don’t really expect my comments or questions to result in an addition to the curriculum while the course is under way. But I do suspect the instructional team is feeling their share of anxiety about how this is going.