Over the weekend, I found myself this close to the finish line on a big task. Then my bobbin thread ran out. After a moment of frustration, I thought how silly that was compared to the Olympic triathletes who had to change bicycle tires during their race. I love the Olympics. Puts things in perspective. 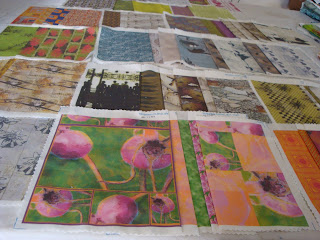 I’ve been sewing the proofing swatches of my Spoonflower fabric designs into sample collections, both for my own reference and to make it easier to illustrate concepts in my Digital Fabric workshops. I teach that again this week for Michigan League of Handweavers. And I have plenty of samples. So I didn’t refill the bobbin and kick for the finish line. Instead, I got wash off the clothesline, went for a walk with Bill and Scout, and watched the Olympics again.

Sometimes it feels like the clock is always ticking and the to-do list never gets shorter. It’s August and unpulled weeds have set seeds. I haven’t started the deck project. And my ambitious summer dyeing plans? Those withered on the vine. 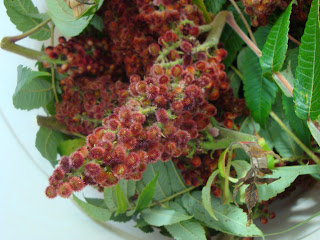 But I did get a staghorn sumac dyebath brewed from Bill’s leftovers. We gathered last week for a batch of wine. Bill scraped the fuzzy berries for wine, and I got the staghorn stalks and leaves for dyeing. After a couple days of soaking in Mom’s aluminum jelly kettle, I put the kettle on the stove to barely simmer for an hour or so. Yesterday I strained the liquid, but I haven’t dyed with it yet. It looked like there’s color left, so I put the solids into bags in the freezer to deal with later. Maybe when I’m back from Michigan.

Probably not. I need to do the things its been too hot and busy to do before it gets too cold.

In the meantime, I’ll be watching the Olympics and celebrating the achievements of all the athletes who made it there, whether they get to stand on a podium or not.