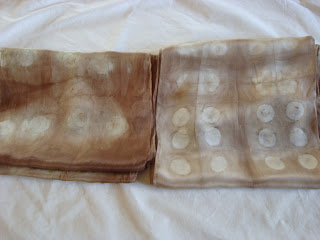 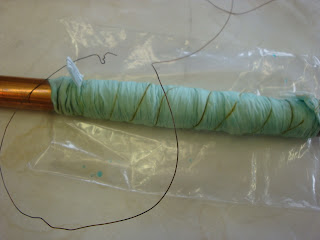 In her book Eco Colour,  India Flint suggests wrapping a cloth soaked in vinegar, urine or seawater around a copper pipe for a few days. Not having seawater and knowing I would be showing this sample at the Wisconsin SDA meeting, I chose vinegar. (If you want me to sample the third option, leave a comment at the bottom of this post or at my Facebook page. You don’t have to spell it out — just say “Double Dog Dare.”) 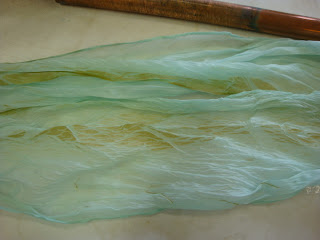 The pipe wrap method is brilliant in its simplicity. I didn’t soak the fabric, just spritzed it with vinegar after wrapping, then put the works in an unsealed plastic bag so it wouldn’t dry out too quickly. After a few days, the copper wire I used to secure the fabric to the pipe left some nice markings, and the silk took up the copper beautifully.

India recommends this method for preparing fabric for green or blue dyes. The end result I wanted to test is well outside that color family. I wanted to see what would happen if I used this method prior to willow immersion dyeing. Dyeing the piece on the pipe would require a greater volume of dyebath than I wanted to commit to a sample. So I took the fabric off the pipe and made a simple resist using washers and a C-clamp 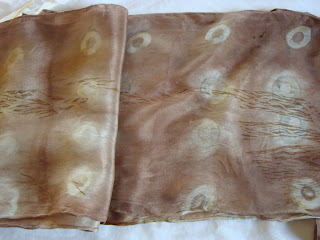 After simmering, the greenish tint was no longer evident in the resist areas. The other areas took up more color from the dyebath than the sample that didn’t the get copper pipe treatment: 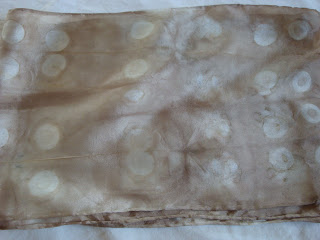 Copper wire makes frequent appearances in the cold-bundle pieces I dye in plastic bags, producing a spectacular gold when combined with willow leaves in that process. If I were better about labeling my samples and keeping them segregated from the general population of fabrics in my studio, I’d show you an example. 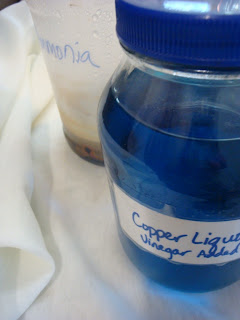 I also use copper liquor, made by soaking copper scraps in a vinegar solution, as both a mordant and a modifier. That’s a technique I learned from Jenny Dean’s book Wild Color, which I’m happy to say is back in print.

Both Wild Color and Eco Colour are, in my opinion, must-haves for anyone interested natural dyeing. Don’t let all the pretty pictures fool you into thinking these are just eye candy books. In the text, you’ll find enough good information to guide your own experiments for seasons to come.

Tomorrow I’ll show you another willow surface design experiment. This one was inspired, not by a book but by how people have learned to apply color and pattern to fabric for thousands of years: “If you can’t fix it, feature it.”