Last week I spent some time testing ways to speed up a process that is mindlessly simple when you don’t care how long it takes. For years, beautiful color and intriguing patterns have been a side benefit from using old dish towels to mellow bark for weaving. The longer you leave bark tightly rolled up in damp fabric, the better. After removing the bark from the fabric, the longer you leave it before washing, the better.

It’s a lazy way to do things and thus perfect for me. Nevertheless, I wanted to test the adage “heat = time” as it relates to bark + cotton. 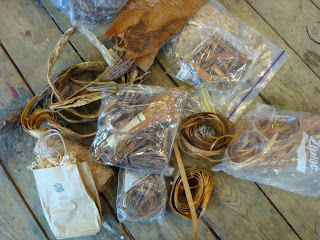 The first step was to narrow down my choices. In a couple of minutes I gathered willow bark, cedar bark, birch bark, elm bark, spruce bark, white pine bark, cherry bark, black walnut shavings, and a couple of barks I can’t identify because, duh, I didn’t label them. It would probably have been smarter to test methodically and compare with known results from the slow-and-lazy approach. Of course it would. Instead, I chose the two I was most unfamiliar with — elm bark and black walnut shavings. 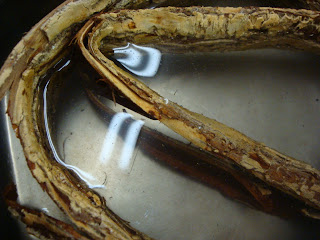 The night before my experiment, I put the elm bark in to soak in plain water. 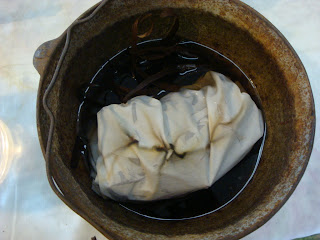 At the same time, I put the black walnut shavings to soak in an old iron kettle, hoping to get enough mineral leach to darken the color. While I was at it, I wrapped up a couple of fabric bundles and let them soak overnight in the kettle. 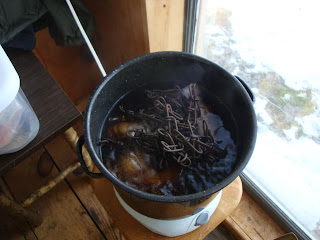 The next day, I transferred the elm bark and soaking water to an enamel pot, threw a length of chain on top to weigh down the fabric and interact with the tannin to yield a darker color. After simmering for about an hour, I removed the fabric. I saved the elm bark soup in another container, then transferred the black walnut stew from the iron kettle (which won’t sit on my hot plate) into the enamel pot. Since the chain was already there and worked so well to hold the bundles down, it went back in. 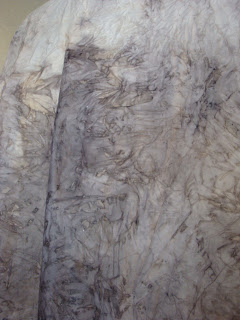 While neither method produced results of heartstopping beauty, I didn’t really expect them to. But they produced a modest amount of color and pattern, and thoroughly tannin-infused fabrics that took mineral printing well. More on that next time, along with (I hope) shots of fabrics I overdyed in the indigo vat before I remembered to take pictures. That fabric is in the wash now.

I saved all the iron-rich bark soup in a plastic jug, and now I’m contemplating whether I should add a tiny bit of sugar and yeast to kick-start some fermentation. Any thoughts or advice before I try to explain this wild hair to my husband?