Can a blog post with a picture of paperwork inspire you in your fiber art? 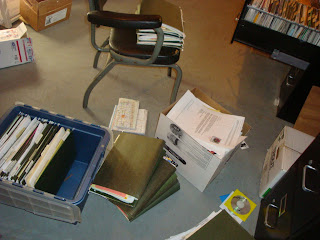 It won’t if you believe the fairy tale that real artists ignore the world and just disappear into their studios, where everything they create is magical. The truth is closer to this: Real artists create some stuff that is magical, some stuff they have to get out of the way to get to the magic part, and some stuff that seems barely related to studio work. Stuff they’d rather ignore altogether. Like paperwork.

Over the years, along with a whole bunch of studio work that is less than magical, I’ve produced a lot of paperwork. Nobody’s going to hang it on the wall and say, “Did you notice how that workshop description reflects the state of the world at the turn of the millennium? How about that that file from the end of the Aughts?”

Yesterday I purged files. Four file drawers yielded three boxes of paperwork to recycle from more than10 years of teaching. I can now close the top drawer I had been using as a horizontal surface for stacking stuff that wouldn’t fit inside. I pitched double prints from photos I took before we got a digital camera and the option to just delete the yucky shots. I pitched old contracts. I pitched handouts and outlines from classes I enjoyed teaching but for various reasons know I will not teach again.

(Here’s where I get to the part I hope will inspire you.) Making choices like that last one is hard. It’s easier to say, “I might need that again” and save it than to let it go, less scary to add things to a list of what’s possible than to take them off it. Nobody wants to burn bridges. But how much infrastructure can you maintain?