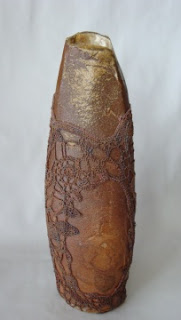 Joan Molloy Slack is a felter and a potter I got to know recently when we collaborated on two pieces for a show. One of the pieces Joan sent me a piece was from her series of Standing Stones. I loved the energy of the shape, and the subtle mystery of the markings on it.

For my part of the collaboration, I used an ancient fiber technique called looping to create a sheath that embraces the form. You can read more about looping here.

Some of the markings on the pottery are covered by the looping, but they’re still there, echoed in the shapes of the stitched motifs. Like mysterious artifacts of the ancient world, the power of the piece is not diminished because it’s no longer seen exactly the way it was by its creator.

Perhaps someday another artist will pick up this piece and add another layer of markings, another chapter to the story of this standing stone. And perhaps after many, many somedays, a scholar will study it layer by layer, trying to determine what it was we meant to say.

I hope so. I left a door open for them.